"Scientists from Arizona State University and the University of Oxford, whose work appears in the April 30 advanced online publication of the journal Nature, have synthesized and studied a sophisticated molecule that, under illumination, is sensitive to both the magnitude and the direction of magnetic fields as tiny as the Earth’s, which is, on average, one-twenty thousandth as strong as a refrigerator magnet.

ASU’s Devens Gust, professor of chemistry and biochemistry in the College of Liberal Arts and Sciences, states that “although the chemical magnetoreception mechanism for avian magnetic navigation has been discussed by many investigators, our research provides the first proof that this mechanism can actually function with magnetic fields as small as those of the Earth.” 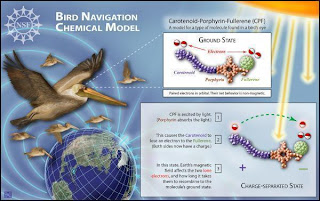