This past spring, a 6-ounce Red Knot (Calidris canutus)— a shorebird only two-thirds the size of a city pigeon—flew non-stop for six days and nights, covering 5,000 miles (8,000 kilometers) across the Amazon and the Atlantic Ocean between southern Brazil and North Carolina, shattering the previous known Red Knot record by nearly 700 miles. Late in the previous summer, the same Red Knot flew non-stop for eight days between Canada’s Hudson Bay and the Caribbean.

These are two of the fascinating results just published in the bulletin of the International Wader Study Group by a group of shorebird researchers from the United States, Canada, Argentina, Britain, and Australia. Lead author Dr. Larry Niles, a scientist with the Conserve Wildlife Foundation of New Jersey, and his colleagues employed a relatively new technique—sunrise- and sunset-sensitive geolocators attached to the legs of Red Knots in New Jersey—to shed new light on the annual migration of this species of special concern. Red Knots winter as far south as Tierra del Fuego, South America, and breed in the Arctic. 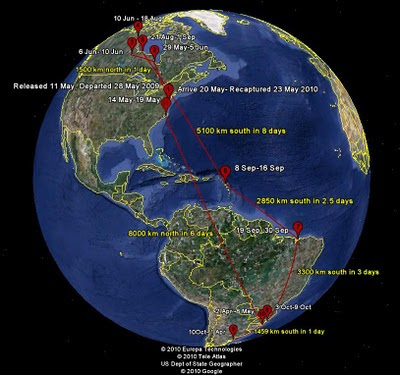 “We’ve long known that reaching the Arctic in time for breeding requires long-distance northbound flights, thereby making quality stopovers, such as the Delaware Bay, critical for resting and refueling,” says Niles, the project’s chief investigator. “The surprise here was that after the breeding season all three birds with geolocators also made long-distance return flights, highlighting the importance of southbound stopover sites such as Cape Cod in Massachusetts, and New Jersey’s Atlantic coast.”

The data also revealed that during the 2009 southbound migration, tropical storms caused two of the birds to make long, energy-depleting detours. One bird detoured more than 620 miles (1,000 kilometers) to avoid Tropical Storm Danny in late August, and then in early September encountered Tropical Storm Erica before arriving in Brazil. The other bird detoured approximately 870 miles (1,400 kilometers) to avoid strong adverse winds while over the Atlantic before resuming its flight south.

“Global warming models suggest increases in the frequency and strength of tropical storms,” says Niles. “If this happens it could be devastating to shorebirds’ southward migration.”

The study also found that the birds, which most likely were flying as part of a flock, took some previously unknown migratory paths. One bird flew straight across the Amazon, through habitat mostly inhospitable to shorebirds. The data not only re-validated the importance of a number of key, known stopovers (San Antonio Oeste in Argentina, the Maranhão region of northern Brazil, and the Delaware Bay in the U.S.), they also identified a number of previously little-known stopovers, such as the Churchill region of Hudson Bay and the Lesser Antilles in the Caribbean.

Biologist Patricia González is an Argentine researcher who follows the knots to many places along their migratory route. “There are no borders for these birds,” she says. “This kind of project is only possible thanks to the enthusiastic network of researchers, volunteers, and communities that is being built throughout the American flyway. The knots are teaching us about collaboration.” 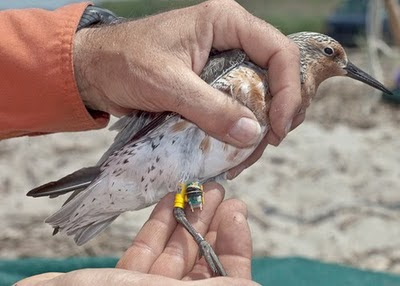 These results suggest that geolocators are likely to afford valuable new insights to our understanding of Red Knot migration strategies, as well as their breeding and wintering locations. Between May 2009 and May 2010, the research team fitted geolocators to 200 more Red Knots they caught in Canada, Massachusetts, New Jersey, Florida, Texas, and Argentina. The future recovery of some of these birds and their geolocator data will add even more knowledge to aid Red Knot conservation.